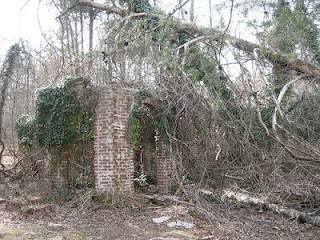 In the 1970s, a retired associate professor from the Chicago area decided to give up his former life and build a grand estate outside of Trion, Georgia. Dr. Charles Scudder, rumored Satanist and LSD experimenter, along with his servant and lover, Joseph Odom, gave up all material possessions, and cleared a tract of wooded area in Georgia, on which was hand-built a fine estate.

The estate would come to be called Corpsewood Manor, and held a variety of gothic and ritualistic paraphernalia and decor. It had no electricity, phone, or running water, and the two lived in relative seclusion, save for a small circle of friends who had similar ideals and lifestyles. It is rumored that a life time supply of LSD lured these people to the manor, where they would be involved in sadomasochistic and ritualistic practices. The house contained what was known as the "Pink Room," which held various restraints, torture devices, and homosexual pornography.

One of these members of this small circle, Kenneth Brock, was telling another friend, Tony West, how grandly the two lived on top of the mountain, and Tony concocted a plan to rob the two men. On the evening of December 12, 1982, Kenneth, Tony, Tony's cousin, and the cousin's girlfriend, paid an unexpected social call to Corpsewood Manor. Something in Tony snapped, and both Scudder and Odom, plus their two mastiffs, were brutally murdered.

Following the deaths, the families of the victims engaged in a fierce legal battle. Scudder had written his two children and wife out of his will, leaving everything to Odom. If it was determined that Odom died first, the estate would go to Scudder's family by intestacy. If Scudder died first, the estate would go to Odom's family. It was decided by a court of law that Scudder did die first, but not before the estate was pilfered and burned to the ground.

Many artifacts are still missing, but it is these artifacts that are said to be cursed. Visitors to the site report a strange feeling of impending doom and despair, and those who have taken souvenirs often report a string of bad luck that follows, and the feeling that the artifacts are giving off a negative energy.

Both Odom and Scudder were cremated, and Odom's ashes were spread on the grounds of Corpsewood Manor. Perhaps a part of him is still playing the role of faithful servant and lover, and is protecting the rare and expensive occult and other artifacts that once made up the manor.
Posted by TheresaHPIR at 7:12:00 AM