The River of Evil Spirits

I have lived my whole life within sight of the mighty Kanawha River. Approximately 97 miles long, the Kanawha River stretches from Gauley Bridge in Fayette County to Point Pleasant, where it then meets the Ohio River. And, all my life, I've heard 'outsiders' absolutely BUTCHER the pronunciation, lol.

So just where does this strange name come from?

The Delaware Indians called the river Kan-a-wha, or the "place of white stone." However, the local Shawnee people had a slightly different word with a much different meaning. They called the river Ken-in-she-ka. Translated, it meant "the river of evil spirits!"

The Kanawha River we know today is much, much different than the river encountered by the first white settlers in the area. Until fairly recently in history, the Kanawha River was impossible to safely navigate by boat. It wasn't until the 1840s that work began to make it navigable. And, it would be decades after when the first locks and dams began appearing, finally opening up river to larger boats and barges.

Aside from the fluctuating water levels, large boulders, and other hazardous conditions, the Kanawha River was known for whirlpools. These whirlpools are represented in a fascinating piece of local archaeology--a petroglyph known as The Water Panther Stone. 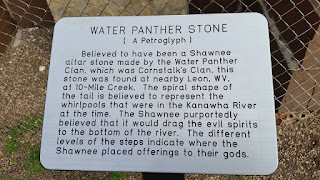 The Water Panther Stone was entered into modern record in 1963. It was found near Leon (Mason County), on the property of the Burdette Family. Originally being cut from a nearby creek bed, the family had been using it as a stepping stone to mount horses. It was later donated to Pt. Pleasant's Tu-Endie-Wei State Park, where it is still on display. Unfortunately, it is nearly impossible to make out the image on the stone, but the photo above shows the carving enhanced with white powder.

According to legend, the petroglyph is believed to be part of a Shawnee altar stone, created by the Water Panther Clan. The tail of the creature represents the Kanawha River whirlpools. With that tail, the Shawnee believed the Water Panther would drag the evil spirits down to the bottom of the river. 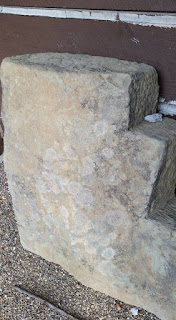 One theory as to who or what these evil spirits may have been comes from another Shawnee legend: The Mysterious Azgen Tribe. You can read more about the Azgens at the link provided, but in summary, the Shawnee didn't permanently settle much of the land south and east of the Ohio River because they believed the land belonged to a ghostly race of 'Moon-Eyed People,' today known as the Azgens. Were these the evil spirits that inhabited the Kanawha River, or are these all just colorful legends to describe a once dangerous and non-navigable river?