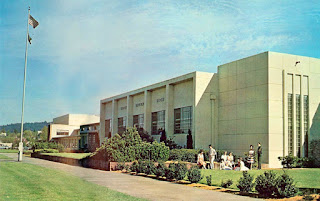 Robert 'Bob' Turnbull Grankey was a sophomore student working in the theater department. On March 11, 1958 he was either installing or changing some lights between the school auditorium's ceiling and the roof of the building. As Robert attempted to cross from one catwalk to another six feet away, 30 students in the auditorium watched in horror as Robert came crashing down through the ceiling, landing on a pair of unoccupied auditorium seats. Those seats, Row G Seats 10 and 11, are said to have remained dented from his fall until they were removed in 1994. It is believed he had slipped trying to get from one catwalk to another, located six feet away. The 50 foot fall killed Robert Grankey instantly, causing a broken neck and major head trauma. He was 16 years old. In his honor, a theater award was set up in his honor, which lasted until at least 1965. Something else lasted even longer....

To this day, one of the most prolific and well-known haunts in the Eugene area is that of South Eugene High School and Robert. The hauntings seemingly did not begin until the 1970s when lights started to mysteriously switch themselves on and off throughout the auditorium. Laughter and footsteps, as well as piano music, have been heard coming from the catwalk area. A brochure photo taken by several students is believed to actually SHOW the ghost of Robert and several other people have claimed to see a shadowy figure sitting in the theater's balcony.

In one particularly strange incident, during the 1994 remodel when the dented seats were removed, a worker allegedly fell from the ceiling...and onto the exact same seats. He survived with only an injury to his foot. Did the ghost of Robert Grankey cause the accident...or did he play a part in saving the workman from suffering the exact same fate as he did, so many years before?