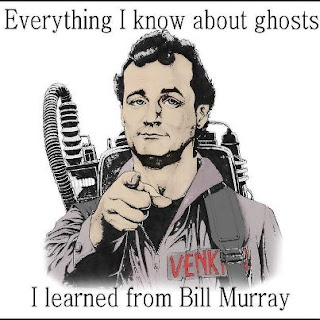 This kind of ties in with my previous post about "cinematic research."  While searching for inspiration for a new blog, I stumbled upon a photo on the Women Who Investigate the Paranormal's Facebook page...the Bill Murray one you see at the top...when I got to thinking about all the movies, good and bad, which feature paranormal investigators in some way. Suspension of disbelief is required for optimum enjoyment.

This post is less of a review thread, and more of a simple listing of some of the movies I am personally aware of on the subject.  If you'd like to add to the list, please comment below!

In no particular order here are five that come to mind right away:

1. Ghostbusters I and II--probably one of my first experiences with an actual movie involving ghost hunting (or parapsychology).  I still love these movies, and will watch them every time I see them come on TV...and I'm proud to admit, WILL quote certain lines where appropriate!

2. Poltergeist--this is another VERY early experience with parapsychology for me.  Even though there's a pretty gory scene that causes one of the researchers to flee the home in fear, I KNEW that this is what I wanted to do with my life, lol.

3. Death of a Ghost Hunter--even with plot holes, the cheesy acting and an audio track from the depths of hell, I still really liked this newer movie, and would recommend it.  If you're not familiar with this one, its about a group of investigators who investigate a "famous" haunted house.  And, as the title suggests, one such investigator becomes what she is searching for.

4. Insidious--This was actually one of my favorite movies in a LONG time!  It is on Netflix, so go watch it NOW if you haven't already!  You will have Tiptoe Through the Tulips stuck in your head for weeks, but its well worth it.

5. Grave Encounters--a televised group of paranormal investigators hunts for ghosts in an old hospital, and get more than they bargain for.  This one is also on Netflix...see if you can name the two most prominent REAL LIFE televised investigation teams that this team is modeled after, lol.

Obviously, some of these titles are more humorous than others...some intentionally, and others NOT so intentionally.  Similarly, some titles showcase paranormal investigators in a more positive light, while others embrace the stereotypical bumbling idiot image that is so often embraced in cinema, especially with the influx of televised paranormal shows.  Trends have gone from concerned groups of scientists with an interest in parapsychology, to fools running around with cameras in abandoned properties.  So what are some of YOUR favorite investigation themed movies?  What are some of the WORST?