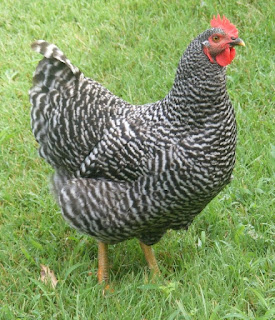 Happy Weird Wednesday! It's been a long time since I shared some just plain strangeness. Luckily, as I was researching a completely different topic, I came across this news article from the August 9th, 1923 edition of the Wayne County  (West Virginia) News.

The three-legged chicken, the nine-days wonder of Dock's Creek, has mysteriously disappeared and left behind not a clue, not even a track.

Wayne county once again strutted its stuff by producing a chicken in a million--a three-legged one. This chick which disappeared last week belonged to Wiley Irons of Dock's Creek. It was a Plymouth Rock and was about six or eight weeks old. . . .

This short little news article was transcribed and submitted to the WV Archives by June White. And for me, it raises a lot of questions! So, Dock's Creek is an area in Kenova, WV and Wiley Irons WAS a citizen of this small community. Born in 1869, Wiley passed away on September 17, 1947. He was buried among many other relations in the Dock's Creek Cemetery. His life can be verified, but what about that of the chicken?

As of this writing, I have yet to find any other sources that confirm the freakish chicken's existence, but that's not really the mystery, here. Chickens born with extra legs aren't super rare, so I have no doubt that such a creature was born in Wayne County. However, I want to know what happened to the unfortunate bird! Did it just wander off? Was it eaten by a wild animal? Was it kidnapped? And just what does the title of the article mean: "among the missing?" Had an entire group of chickens gone rogue? During my next trip to the library, I plan to search the newspapers from around this time to see if there were any follow up articles claiming the chicken made its way back home...but I'm not holding my breath!

*MORE West Virginia Weirdness can be found HERE!*
Posted by TheresaHPIR at 12:00:00 AM