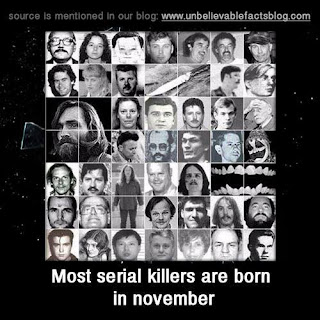 Well, its November 1st. Halloween is unfortunately gone for another year...but the spookiness continues all year here at Theresa's Haunted History!

I'd like to start this new month by wishing all those November babies a very big 'Happy Birthday!' I'd like to follow that up with the hope that none of you November babies reading this blog are associated in any way with that graphic to the left, lol.

A couple of years ago, I came across this photo, or at least, one very similar to it, on Facebook. Since then, I've seen other graphics and even articles posted all claiming the same thing. That thing is this:

*THE MAJORITY OF SERIAL KILLERS WERE BORN IN NOVEMBER*

Apparently there was a study done back in 2006 by Jan Ruis. When Ruis compared the birth dates for 100 serial killers, it was discovered that 17 of the subjects were born in November. That's almost twice as many as the average of 9 serial killers per every other month. But why are so many serial killers being born in November?  Perhaps it has less to do with the month itself, and more with the astrological sign.

Many of these November babies that grew up to be monsters fall under the sign of Scorpio. The astrological sign for Scorpio covers the dates of October 23 through November 21. And, according to a website on horoscopes, Scorpios have the following strengths and weaknesses:

So, yeah. I can see where those tendencies may be conducive to the behavior of a serial killer. Obviously, most Scorpios and/or people born in November never end up as serial killers, and instead are well-adjusted, productive members of society. But, its still an interesting topic to discuss...which is what we'll be doing all month long over at Theresa's Haunted History! Throughout November, I'll be posting some stuff on the supernatural side of serial killers and some additional resources about the astrology aspect. Over my years of research, I've discovered that there are a TON of people out there interested in the paranormal who are also very interested in serial killers and true crime. The correlation is huge.That fact, in and of itself, is worthy of study one day. But first, here's a very short list of some November-born serial killers you may have heard of. Sword and Scale lists the profiles of a few of them!