Gallipolis, Ohio is full of beautiful old homes, many dating back to the early 19th century, not long after the town was settled by a group of 500 French immigrants.  Located just across the Ohio River from Point Pleasant, WV, this quaint little area has a lot to offer in the way of historic (and sometimes haunted!) buildings.  One such building is located not far from the riverfront park on First Avenue.  That building is the Our House Tavern.

Now serving as a museum of local history, Our House Tavern dates back to 1819 and was simply known as Cushing's Tavern at first.  It was built by a prominent local citizen by the name of Henry Cushing, who ran Our House as both a tavern and and inn for travelers going up and down the Ohio River by steamboat. It is said that the tavern gained the name 'Our House' because Cushing would go down to where the boats were docked and yell, "Come on over to our house!", enticing travelers to spend the night at his establishment.  And, at an expensive 75 cents a night, only the more well-to-do traveler was able to stay.  However, the tavern was still a local favorite as well, as it was a social gathering place for the town---a place where citizens could hear the latest news and mingle with out of town guests. 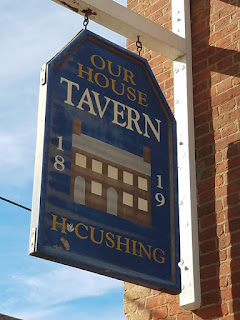 Cushing, with the help of his sister, Elizabeth Cushing Foster, ran the tavern until the early 1860's.  During the Civil War, the home was used briefly as a hospital and then later served as both a private residence and then a boarding house.  In 1933, Dr. Charles E. Holzer bought the property, and eleven years later, donated it to the Ohio Historical Society.  Today, the museum is run by the Friends of Our House Committee, who along with a staff of volunteers, open Our House up every summer for tours and throughout the year for special events.  And while admission to the old tavern is much more reasonably priced these days, many still imagine a time when the home sheltered the more 'genteel' folk.
In fact, Our House hosted two very famous, well-to-do celebrities of the 19th century. On May 22, 1825 the General Marquis de Lafayette was a guest of the Cushings.  de Lafayette had met Henry and Elizabeth's brother, General Nathanial Cushing during his war service, and was invited to stay at the inn, where a large reception was held for him in the upstairs ballroom. The museum boasts ownership of a jacket owned by Lafayette, which was left behind during his stay and each spring, the museum holds an event to commemorate Lafayette's visit to Gallipolis.  However, he isn't the only famous visitor.  In the 1850's, Jenny Lind, the Swedish opera singer, made a stop at Our House.  She performed, presumably in the second floor ballroom, during her big American tour. 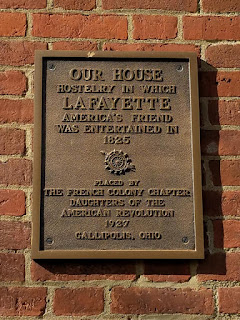 Aside from that one incident, Henry's ghost seems otherwise content.  He is most often seen around midnight, walking up the back path to the home, wearing a pair of short, green breeches.  Neighbors who have witnessed this phantom stroll aren't scared, however.  They just believe that Henry is still watching out for his beloved tavern after almost 200 years in service.