The Allen House of Monticello, Arkansas 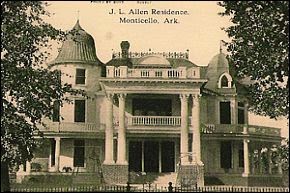 I can't believe its October!  This year has flown by and I've been a little lazy when it comes to updating this blog on a regular basis.  Therefore, it is my goal to crank out at least 5 posts a week, starting with an addition to the Haunted America series:  The Allen House of Monticello Arkansas.

This gorgeous Queen Anne Victorian home was built in 1906 for Joe Lee Allen and his family--wife, Caddye, and his three daughters, Ladell, Lonnie Lee, and Lewie.  Designed by architect Sylvester Hotchkiss and built by Josiah B. White, the home on North Main Street was an opulent and extravagant display for the Allen family.

Unfortunately, life in their beautiful home wouldn't always be so happy.  Joe Allen, who was quite the businessman, operating a hotel and serving as president of a loan and trust company, also dabbled in automobile sales.  On October 23, 1917 he was killed while showing a new model to a potential buyer.  His body was brought home and his funeral was conducted in the parlor two days later.  He was laid to rest in Oakland Cemetery.

His death, however, would not be the only tragedy to befall this family and leave its mark on folklore. Following her mother's Christmas party in the wee hours of December 26, 1948, daughter Ladell took to the master bedroom suite and drank punch laced with mercury cyanide.  She was taken to Mack Wilson Hospital and treated by Dr. Johnnie Price.  Unfortunately, she could not be saved, and passed away on January 2, 1949.  Her mother, Caddye, sealed the room up.  It stayed sealed for the next 37 years.  Rumor has it that the bottle of mercury cyanide was still sitting on a closet shelf when the new owner opened the room.

No one could ever say with certainty why Ladell chose to end her own life, despite the fact that she was seemingly well loved by the community and her family.  However, she wasn't without her own hardships.  Ladell had married a man named Boyd Bonner in 1914, but the marriage was an unhappy one and by 1927 the couple had been granted a divorce.  The rather short union produced a son named Elliot Allen who would die of pneumonia at the tragically young age of 28 in 1944. 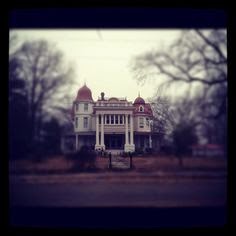 Ladell never remarried, although rumors popped up that she was having an affair with a Texas oil tycoon.  Her ex-husband passed away in June of 1948, six months before Ladell took her own life.  After her death, Caddye remained in the home until her own death in 1954.  Two years later, a grandson of the family began renting out rooms as apartments, still keeping the master suite sealed.

It was during this time that the ghost stories began.  Tenants reported a myriad of strange phenomena, including furniture being moved around on its own, photographs marred by hazy, human figures, and even sightings of a woman sitting in a turret window seat.  Footsteps were heard, and one story involves a door that just wouldn't stay shut; it was as if someone were on the other side pushing back at the tenants as they tried in vain to shut it. Although there are several female deaths associated with the Allen House, many believe the main ghost to be that of Ladell who tragically took her own life.

The home stayed in the family until 1986.  Its current owners, the Spencers, have been there since 2007 and live in the home as their private residence.  However, they do conduct private historic tours by appointment only year round, and offer a special Halloween haunted history tour on October 30th and 31st each year.  The cost is $10 and more information can be found at the links provided below.  The Spencers have also been known to let in paranormal investigation groups, several of which who have had some interesting experiences of their own at the house!  You might also remember this house being featured on a bunch of different television shows, including Ghost Hunters and My Ghost Story.