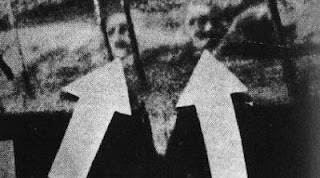 In December of 1924, a United States tanker ship owned by The Cities Service Company was transporting a shipment of crude oil between California and New Orleans via the Panama Canal.  The ship was called the S.S. Watertown and due to a freak accident at sea, would be doomed to a life of infamy.

On December 4th, two men were sentenced to "black work," a punishment for crimes that have been lost to time.  These two men were James Courtney and Michael Meehan.  This was the first voyage for both men on the S.S. Watertown, but both had an extensive history on the sea.  Courtney, who was described as a "hulking Irishman," had seven years experience on cargo ships in the Indian Ocean.  Meehan, rumored to be a gypsy, had 12 years experience with various Pacific Ocean trade routes.

This "black work" the men were sentenced to involved them scrubbing and empty cargo tank in the ship's aft hull.  What seemed like a routine task turned deadly, when the men were overcome by fumes, and unable to escape the cargo tank.  The men were found unconscious and unresponsive in the tank.  Meehan was on the floor, and Courtney lay across his body.  It appears as if Meehan passed out first, followed by Courtney, who was attempting to drag Meehan out towards the ladder.  The ship's doctor was unable to revive them, and both men were pronounced dead at 13:07.

Per custom, the men were given a burial at sea off the Mexican Coast.  The very next day, a very agitated crew began being haunted by the disembodied heads of the two men.  Around dusk, it was reported to the First Mate that the disembodied heads of Meehan and Courtney had been spotted among the waves on the side of the ship where the bodies were dumped.  All who witnessed the phenomenon agreed that the heads were definitely belonging to the two men who had just died.

When the ship docked in New Orleans, the ship's captain, Keith Tracy, went to the field offices of the Cities Service Company to report the deaths, but also to report the strange occurrences that were connected to the deaths.  Unconvinced, the company suggested that Tracy purchase a camera in order to get proof.  Tracy, who had been with the S.S. Watertown since 1921, was a no-nonsense sort of person, and agreed to try to get proof of the sightings. 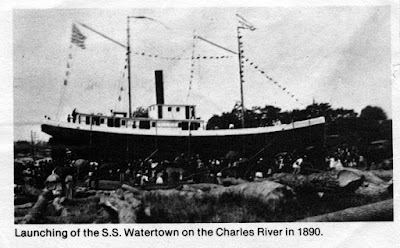 Tracy sent his first mate out to purchase a camera while docked in New Orleans.  The camera purchased was the new Kodak Model F Brownie Box.  The original purchase price of this camera, which debuted in 1924, was $2.75.  It featured an aluminum body, meniscus lens, three aperture settings, one fixed speed shutter setting and tripod mounting.  The camera required 120 roll film, which contained 8 frames per roll, and produced 9x6 frames.

On the return trip, the heads continued to plague the crew, and when alerted that there was a sighting, Captain Tracy grabbed his camera and took six shots of the heads, which he also witnessed with his own eyes.  The film was left in the camera, and the camera was locked in the ship's safe until they returned to port.

After docking, Tracy sent the camera and film to his employers at their New York office.  The film was developed by James Patton.  Out of the six photos taken, only one showed the two disembodied heads of what appears to be Meehan on the left, and Courtney on the right.  The Burns Detective Agency was called in to examine the evidence.  After scrutinizing the negative, the film, and the camera, they came to the conclusion that nothing had been tampered with, and that the popular  Burn and Dodge process of film development had not been used in creating the images.

Meanwhile, back on the S.S. Watertown, the heads were appearing with less and less frequency, and by the fourth voyage, a complete crew change had resulted in a total disappearance of the heads.  The matter seemed dropped, except for the occasional rumor, until 1934: ten years AFTER the photo was developed.

The photo was found and published in the shipping journal, The East Coast Journal.  By this time, Captain Tracy and the first mate had died, the original crew was untrackable, and the original photo and negative had been lost.  Still, the Director of the American Psychical Institute, Hereward Carrington, was called in to examine the evidence.  Carrington's conclusion was that the photo was a rare example of a form of psychic photography involving thought forms.  The crew's impression of the two dead men was so strong, that they were able to psychically create the images, both in the waves, and onto the film.

In recent years, it has been claimed that there is a third, and perhaps even a fourth face in the photo, lending to a modern conclusion that the heads are actually a product of pareidolia, a psychological phenomenon where the brain perceives patterns as easily recognizable objects and stimuli, such as human faces.

Unfortunately, with the original photo and negative lost to time, we may never know for sure just what the true cause is behind the S.S. Watertown incident.
Posted by TheresaHPIR at 6:40:00 AM