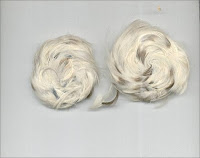 One of the more intriguing legends of this region has its roots possibly in Welsh folklore, and has traveled West into Missouri and Indiana, and beyond...this is the "Death Crown,"  also referred to as the Feather Crown or Angel Crown.

Finding a crown in a person's pillow meant that the person has gone to Heaven.  The phenomenon was reserved for the deceased faithful, and those who had been saved before death.  Most of these tightly wound crowns measure in at about 2-3 inches in diameter by 1 to 1.5 inches thick, but some are much larger.

While it is argued that a bedridden person's head could cause the feathers to matte together, the faithful maintain that it is a sign from the angels that their loved one is now with God, and no scientific explanation has been brought forth that can sway these deep rooted beliefs.

Many families in this area still have boxes of Death Crowns pulled from their ancestors' pillows, and many of those have made their way into museums.  The world's largest collection of Death Crowns can be found at the Museum of Appalachia in Clinton, TN, but there are many smaller collections in museums all over the area, as far away as Indiana, where the Lawrence County Museum of History has several on display.
Posted by TheresaHPIR at 11:29:00 AM