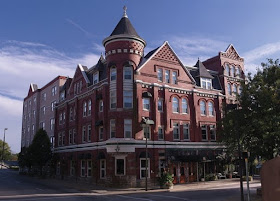 The Blennerhassett Hotel was built in 1889 by William Chancellor, a wealthy businessman of Parkersburg.  The Queen Anne style hotel, which was built to be a showplace of Parkersburg's "Gaslight" era, orginally held 50 guestrooms over four floors, with a 5th floor containing the kitchen, and the 1st National Bank of Parkersburg occupying part of the lower level.  It was named for Harman and Margaret Blennerhassett, who 100 years previously, had owned a mansion on a nearby Ohio River island and added to the National Register of Historic Places in 1982.

After a complete renovation in 1986, and work done in 2003, the historic hotel is once again a showplace...not only for its fine cuisine and guest services...but for a plethora of different ghosts and paranormal manifestations!

William Chancellor is believed to still be haunting his hotel, and makes his presence known with the smell of cigar smoke, or with a glowing anomaly showing up in photos of his portrait...an anomaly that is said to be the ethereal burning ember of his cigar.

Other apparitions include a man in gray on the second floor, a man in a white tuxedo who frequents mirrors, a sobbing woman, and a little boy from the 1920s/1930s era.  It is also said that the elevators have a nasty habit of always stopping on the 2nd floor, even without anyone on them all!  There is also a phantom "knocker."  Dubbed the 4 'o clock Knocker, he bangs on guests' doors around 4am, but when they open the door, he's nowhere to be found!

The Blennerhassett Hotel is the starting point for the Parkersburg Ghost Tours.  Please see their website for more information.