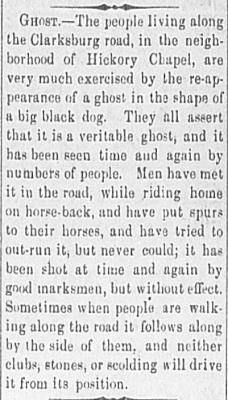 I love finding vintage ghost stories in old West Virginia newspapers! Today's discovery comes from the May 9th, 1883 edition of the Pt. Pleasant newspaper, The Weekly Register, which can be found online at Chronicling America.  I wasn't able to find a 'Clarksburg road' anywhere on modern maps, but I was able to find the small, unincorporated community of Hickory Chapel located near Pt. Pleasant in Mason County.

GHOST---The people living along the Clarksburg road, in the neighborhood of Hickory Chapel, are very much exercised by the re-appearance of a ghost in the shape of a big black dog.  They all assert that it is a veritable ghost, and it has been seen time and again by numbers of people.  Men have met it in the road, while riding home on horse-back, and have put spurs to their horses, and have tried to out-run it, but never could; it has been shot at time and again by good marksmen, but without effect.  Sometimes when people are walking along the road it follows along by the side of them, and neither clubs, stones, or scolding will drive it from its position.

Theresa's Note:  Stories of phantom black dogs have always been fascinating to me and they are certainly an integral part of ghost lore.  Known by many names, including the Black Shuck, phantom black dogs are a popular motif in the ghost stories of England, and undoubtedly, settlers from the British Isles brought these legends and superstitions with them to America...and even to the small, rural community in Mason County.  Tales of black dogs, especially those with glowing red eyes and of enormous size, are generally associated with the demonic, but I've found another aspect of the phantom black dog mystery.  Here in America, especially in the rural south, these phantom black dogs have become associated with being cemetery guardians, especially in cemeteries where there are many slave/former slave burials.  These beliefs may stem from stories of the Church Grim, another English tale of a black dog who protects churches and church burial grounds. The whole Pt. Pleasant area has such a history of strange and unusual activity that it just seems natural to add a phantom black dog into the annals of its haunted history!